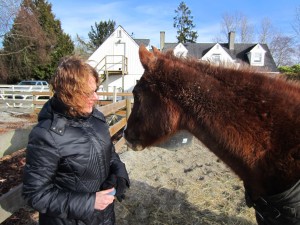 I met Hillary Schneider on a cold damp evening a few weeks ago at a gathering of Coaches Training Institute (CTI) coaches and leadership alumni. Hillary and I had the kind of connection where I could hardly tear myself away, though it was late and the ride home long. That night, she invited me to her Epona Rise Retreat Centre in Ladner, BC to spend time with her and her horses.

Yesterday, the day came and I went to Hillary’s farm where we spent over two hours exchanging stories while I massaged her dog Luca for most of that time. The conversation was both grounded and ethereal, and I wondered if I would have any emotional energy left for the horses.

When we were finally ready to go outside, the horses had come back from the field on their own. One of them came toward me. Before entering the gated area, Hillary began to direct my attention to my body. What was I feeling? Where? A dull ache began pulsing in the place that I associate with my right ovary. Although my body was having many reactions, my mind was not in thinking mode and it was hard to answer questions. She opened the gate and I asked her to go in first, since I had not had experience with horses and was afraid.

Luca came in with us and first thing, the horse chased him away. What made him chase Luca away, so unusual, Hillary said, for this horse?  Luca was no threat, just a playful, loving puppy. Why now? What did that mean for me?

The horse came up to my face and breathed me in, the way our cat loves to come close and smell me. The horse was bigger, a stranger, and I did not understand what to do. There was nothing to understand and I could feel the chill of the day and my fear begin to shake my body, my left knee twitching up and down. Hillary continued quietly talking, asking questions and getting me to notice.

After some time, a dark horse came toward us, chomped on my left breast and I was unmoved. I was not afraid and I had no idea why. He was pushy and Hillary asked me to be assertive. I put my hand up and said no and got him to stop and back off.

She took me back to my original horse and told me that these horses were rescue horses. My horse had come to her severely underweight and with trauma. He had weight issues. So did I. And trauma.

“This is Nazir, a visionary horse,” Hillary said. “Notice how he stares into the distance. He knows things before any of the other horses know.” I told her how the day before, I had read that leaders must have visions, and since I did not easily “vision” I had decided that I must do it anyway and see what came of that.

Hillary told me some other meanings to Nazir’s name and they flew out of my ears with the wind. She continued to make connections between what was going on with the three horses who were attending my process and my life. I don’t remember much of what I wanted to remember. Not the words.

In many ways, the experience had a dream-like quality that touched deep unconscious waters from where messages bubbled up this morning:

And later, during the writing of this piece: “Connect your Spirit to your body. Feel the cord that connects you.” I expect to be remembering and finding more as time goes on.

I am left deeply moved and transformed by this generous encounter and Hillary’s wise midwifery – she who gently coaxes meaning from and through the living metaphor of rescued horses.